NYPD Police Commissioner William J. Bratton (and former Chief of Police of the LAPD) has agreed to write the foreword for the new book: The Protectors: A Photographic History of Police Departments in the United States by James A. Bultema. (Due in November, 2016-preorder, Photohistoryofpolice.com).

Synopsis: In a time of intense public controversy over policing, it’s essential to consider—who are these men and women patrolling the streets of America? Is this discord deserved?  Many would argue—no, that the police are “scapegoats” for failures of society as President Obama recently stated. For a better understanding of these police officers, author and former cop, James Bultema, takes the reader on a photographic journey of America’s city police departments. This historical tour begins in the 1850s and uses over 300 captivating photographs to give the reader some insight to our country’s protectors.

Police are at the front lines of history as it is being made and these riveting photographs showcase America’s story as it’s unfolding through officers in action. Through the magic of the camera lens, a vanished world lives again and invites the viewer to be part of a moment long ago and partner up with those brave souls who were and are The Protectors of a nation.

You can go to my website and see several of the photographs which will be included in the book (two of which are below). Just clink on the link photohistoryofpolice.com

Impounding front seats. Miami (Florida) Police Department. Circa 1925.
Miami police had a rather practical way of enforcing parking regulations before the development of traffic tickets. They simply seized an automobile’s front seat and held it at headquarters until the owner redeemed the cushion by payment of a fine. 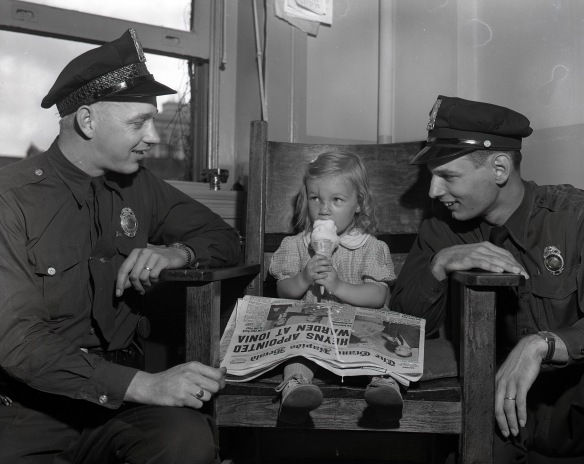 Lost and Found. Grand Rapids (Michigan) Police Department. Circa 1950s.
In the expansion of police departments in the United States, sometimes things get misplaced. These two officers have it all figured out. A little ice crème and an old newspaper to catch the drippings. From this photograph, it is hard to tell who is having more fun.